In this paper, an autonomous vision-based tracking system is presented to track a maneuvering target for a rotorcraft unmanned aerial vehicle (UAV) with an onboard gimbal camera. To handle target occlusions or loss for real-time tracking, a robust and computationally efficient visual tracking scheme is considered using the Kernelized Correlation Filter (KCF) tracker and the redetection algorithm. The states of the target are estimated from the visual information. Moreover, feedback control laws of the gimbal and the UAV using the estimated states are proposed for the UAV to track the moving target autonomously. The algorithms are implemented on an onboard TK1 computer, and extensive outdoor flight experiments have been performed. Experimental results show that the proposed computationally efficient visual tracking scenario can stably track a maneuvering target and is robust to target occlusions and loss.

A DJI Matrice100 is used as the UAV platform, which is equipped with an onboard TK1 computer and a monocular RGB gimbal camera. An overview of the system configuration is shown in figure below. The gimbal camera mounted on the UAV platform provides the video stream and internal angles for the onboard computer. The visual tracking algorithm obtains position of the target on the image plane, which is feedback to the gimbal controller. In addition, the states of the target are estimated by fusing the inertia measurement unit (IMU) data of the UAV platform and the gimbal. A switching tracking strategy is performed based on the estimated states. The high-level controller computes the desired velocities of the UAV, and the low-level controller controls the attitude correspondingly. The frequencies of the video stream and the control signal are 30Hz and 10Hz, respectively. 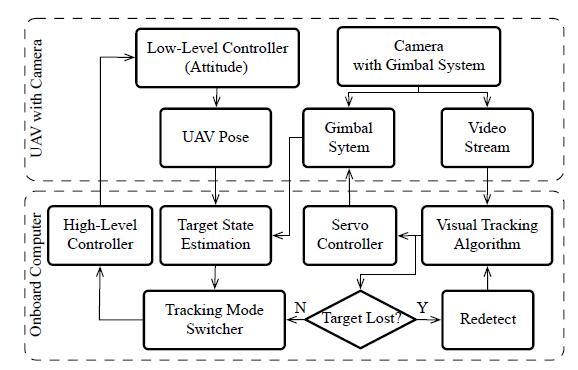 The performance of the visual tracking scheme is evaluated on several videos collected using the UAV. Three cases are considered, i.e., no occlusion, partial occlusion and full occlusion.

Figure below indicates that the accuracy of the target state estimation decreases along with the increasing of the pitch angles.

The UAV tracks the maneuvering person in unstructured outdoor environments and the trajectories of the target person and UAV are shown below. 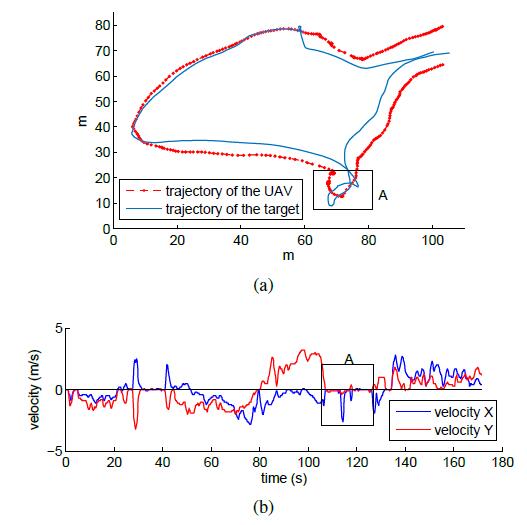