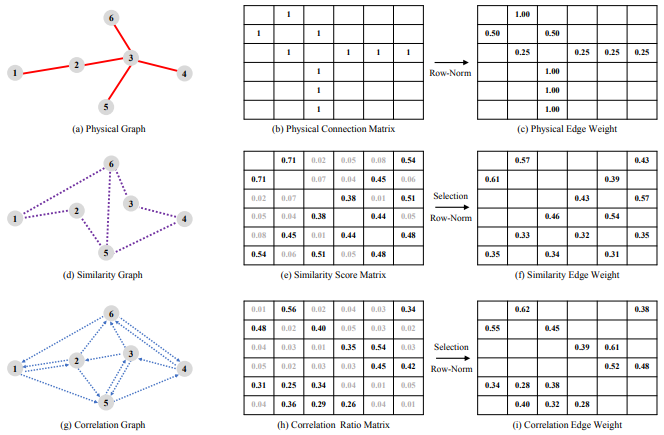 Due to the widespread applications in real-world scenarios, metro ridership prediction is a crucial but challenging task in intelligent transportation systems. However, conventional methods either ignore the topological information of metro systems or directly learn on physical topology, and cannot fully explore the patterns of ridership evolution. To address this problem, we model a metro system as graphs with various topologies and propose a unified Physical-Virtual Collaboration Graph Network (PVCGN), which can effectively learn the complex ridership patterns from the tailor-designed graphs. Specifically, a physical graph is directly built based on the realistic topology of the studied metro system, while a similarity graph and a correlation graph are built with virtual topologies under the guidance of the inter-station passenger flow similarity and correlation. These complementary graphs are incorporated into a Graph Convolution Gated Recurrent Unit (GC-GRU) for spatial-temporal representation learning. Further, a Fully-Connected Gated Recurrent Unit (FC-GRU) is also applied to capture the global evolution tendency. Finally, we develop a Seq2Seq model with GC-GRU and FC-GRU to forecast the future metro ridership sequentially. Extensive experiments on two large-scale benchmarks (e.g., Shanghai Metro and Hangzhou Metro) well demonstrate the superiority of our PVCGN for station-level metro ridership prediction. Moreover, we apply the proposed PVCGN to address the online origin-destination (OD) ridership prediction and the experiment results show the universality of our method. 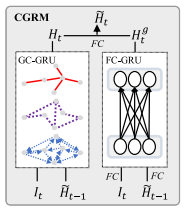 Specifically, PVCGN incorporates a physical graph, a similarity graph and a correlation graph into a Graph Convolution Gated Recurrent Unit to facilitate the spatial-temporal representation learning. Furthermore, a Fully-Connected Gated Recurrent Unit is utilized to learn the semantic feature of global evolution tendency. Finally, we apply a Seq2Seq model to sequentially forecast the metro ridership at the next several time intervals.

We employ the proposed PVCGN to forecast the online metro origin-destination (OD) ridership on the SHMetro dataset, which is more challenging, because the complete OD distribution can not be obtained immediately in online metro systems.

In this work, we propose a unified Physical-Virtual Collaboration Graph Network to address the station-level metro ridership prediction. Unlike previous works that either ignored the topological information of a metro system or directly modeled on physical topology, we model the studied metro system as a physical graph and two virtual similarity/correlation graphs to fully capture the ridership evolution patterns. Specifically, the physical graph is built on the basis of the metro realistic topology. The similarity graph and correlation graph are constructed with virtual topologies under the guidance of the historical passenger flow similarity and correlation among different stations. We incorporate these graphs into a Graph Convolution Gated Recurrent Unit (GC-GRU) to learn spatial-temporal representation and apply a Fully-Connected Gated Recurrent Unit (FC-GRU) to capture the global evolution tendency. Finally, these GRUs are utilized to develop a Seq2Seq model for forecasting the ridership of each station. To verify the effectiveness of our method, we construct two real-world benchmarks with mass transaction records of Shanghai metro and Hangzhou metro and the extensive experiments on these benchmarks show the superiority of the proposed PVCGN.

In future works, we would pay more attention to the online origin-destination ridership prediction and several improvements should be considered. First, the data of unfinished orders can also provide some useful information and we attempt to estimate the potential OD distribution of unfinished orders. Second, the metro ridership evolves periodically. For instance, the ridership at 9:00 of every weekday is usually similar. Therefore, we should also utilize the periodic distribution of OD ridership to facilitate representation learning. Last but not least, some external factors (such as weather and holiday events) may greatly affect the ridership evolution and we should incorporate these factors to dynamically forecast the ridership.